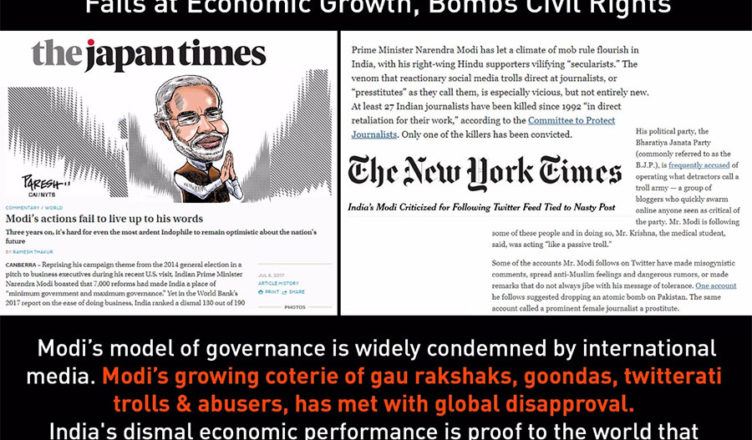 Modi’s model of governance is widely condemned by international media.

Modi’s growing coterie of gau rakshaks, goondas, twitterati trolls and abusers, and silence over murders of journalists and free thinkers has met with global disapproval.

The NY Times in a scathing editorial July 2017 said:“ But, under Mr. Modi’s leadership, growth has slowed, jobs have not materialized, and what has actually been unleashed is virulent intolerance that threatens the foundation of the secular nation envisioned by its founders.”
Now, once again the NY Times has found fault with Modi: “Mrs. Lankesh was a provocative intellectual who criticized many politicians and religious leaders. The way she was killed — gunned down outside her house by a mysterious assailant — was eerily similar to how several other critics of the Hindu nationalist agenda of the Modi government have been silenced.”
His dismal economic performance is proof to the world that Modi’ promises are empty words.
The Japan Times puts it best when it says: “Three years into his five-year term, it is more accurate to describe Modi’s record as “maximum talk and boast, minimum action and results.”