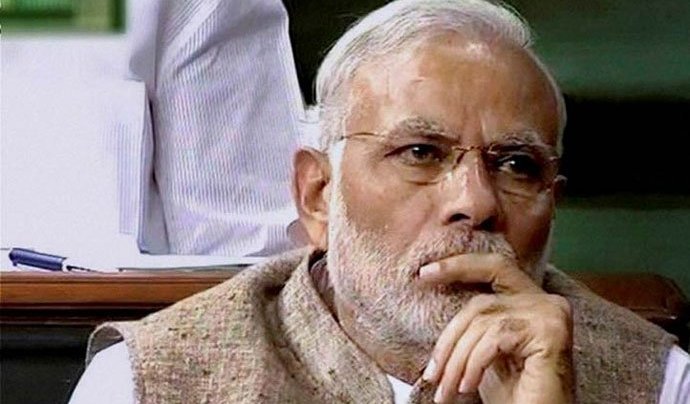 Just when we thought that there are no more twists and turns to the Rs. 11,500 crore PNB scam, another major layer has now unfolded.

The following revelations will leave you stunned:

Nirav Modi i.e. ‘Chhota Modi’ + Mehul Choksi i.e. ‘हमारे मेहूल भाई’ have not only siphoned India’s banks of Rs.21,306 crore but the new layers of conspiracy being unearthed now disclose that India’s middle class and common people have been duped of Rs.5,000 crore or more.

A complicit Modi Government has even refused to publicly acknowledge this loot and duping of common man’s money i.e. ‘Jan Dhan Loot’.

Gitanjali Gems Limited had floated three jewellery investment schemes i.e. (a) Shagun, (b) ‘Swarna Mangal Labh’ (SML) and (c) ‘Swarna Mangal Kalash’ (SMK). Modus operandi of the Scheme was that an ordinary person, seeking to buy jewellery as also to earn a return on investment, was required to pay 11 installments of a specified amount. In return thereof, Gitanjali group offered to pay the 12th installment as free. Tenure of these installments could be 12 months, 24 months or 36 months. At the end of the tenure, the amount so accumulated could be redeemed for jewellery with additional bonus of up to 50%.

Like in the case of banks, common man was also duped by way of these schemes, in as much as, in a huge number of cases, neither was the installment paid nor the jewellery given or amount returned. Consequently, a large number of police complaints were filed in Gujarat by way of affidavits in September, 2015. Copies of four such affidavits submitted to Gujarat Police are appended as Annexures A-1 to A-4. Copy of the card issued for the scheme is attached as Annexure A-5.

Again on 10th October, 2017, a large number of persons filed complaints against the patent fraud being played upon common men by Gitanjali Group. Shockingly, instead of registering an FIR and arresting Nirav Modi/Mehul Choksi and others, Bhavnagar Police kept the matter pending and finally referred it by recording that it should be investigated by CID Crime, Gandhinagar.

Most interesting fact is that although complaints were given on 10th October, 2017; Gujarat Police waited upto 25th January, 2018 by when Nirav Modi/Mehul Choksi had run away from the country along with their families. Across Gujarat itself, there are thousands of such cases, where there was complete inaction by police in proceeding against Nirav Modi/Mehul Choksi.

Across the country, there are thousands more. Yet, it is indeed surprising that people were being defrauded with impunity and the entire government machinery of BJP remained a mute spectator. Complicity and protection at the highest level is, thus, writ large.

Despite huge number of complaints of fraud and duping of common men pending, BJP Government projected Gitanjali Group of Mehul Choksi/Nirav Modi as the Collaborator for Vibrant Gujarat Summit 2017 (held from January 10-13 January, 2017).

No wonder, there was complete inaction against Chhota Modi and his uncle.

3). Why is BJP mum on the connections of Nirav Modi/Mehul Choksi with the BJP leadership?

(i)        Was Mehul Choksi not invited in the small gathering when PM Narendra Modi inaugurated the Gold Demonetisation Scheme in the year 2015? Did Prime Minister not refer to Mehul Choksi with great affection in his speech, specially addressing him as ‘हमारे मेहूल भाई’?

(ii)       Was Nirav Modi not part of the gathering of Indian CEOs photographed with Prime Minister Modi in Davos, Switzerland on 23rd January, 2018 (after his escape from India) and was this photograph not tweeted by PMO, PIB and MEA tweeter handles?

(iii)      Why is Prime Minister Modi fighting shy of admitting his connection to Mehul Choksi and Nirav Modi?

(v)       Is it correct that Mehul Choksi and Geetanjali Group had showcased creation by Ms Shaina NC in the August, 2015? Is it correct that this show was presided over by Mrs. Amruta Fadnavis, wife of Maharashtra Chief Minister, Devendra Fadnavis and Ms Anar Patel, daughter of the then Chief Minister of Gujarat, Smt. Anandi Ben Patel, was also present as a guest of honour in the function? Is it correct that Mehul Choksi had given huge ads in the newspapers of this function showcasing the sponsored event by Gitanjali Group along with pictures of the persons named above to project his proximity.

Things are now getting clear as to how diamond merchant Nirav Modi is still getting cover up and why the government is absolutely unbothered to initiate any action against him.