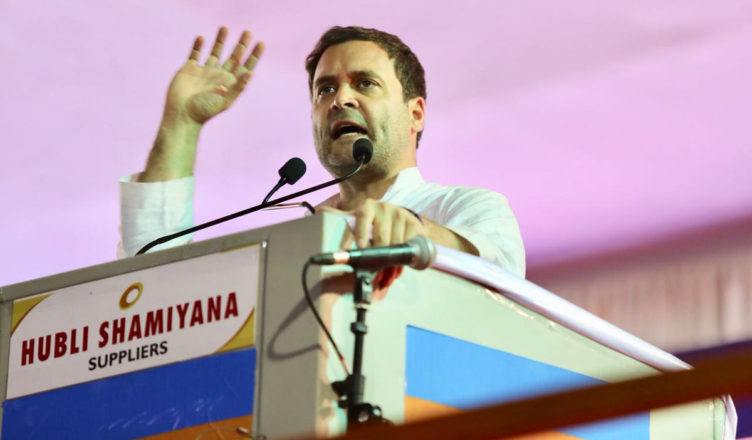 In an another verbal attack on Prime Minister Narendra Modi, Congress president Rahul Gandhi on Monday said though the Bharatiya Janata Party (BJP) has both money and media with them, the grand old party had the people with it because of its good governance in the Karnataka.

The Congress chief asserted that their party would return to power in Karnataka again.

“The Congress will win the assembly election in Karnataka again and return to power as our government fulfilled all the promises it made and lived up to the people’s expectations,” Gandhi said at a public rally near Ramdurg in the state’s northwest border district.

Resuming his tirade against PM Modi, Gandhi said, “Modi talks of fighting against corruption but records show that he did not bother to set up the anti-graft body (Lokayukta) even when he was the Gujarat Chief Minister for lover 12 years or Lokpal in New Delhi since he became the Prime Minister in May 2014”.

“Whatever Modi does benefits only the people like diamond trader Nirav Modi who fled the country after siphoning Rs11,000 crore from the Punjab National Bank’s Mumbai branch over a period since 2011. Will Modi speak up and inform the nation how fraudsters manage to get away while the ‘chowkidar’ silently watches,” he said.

Exhibiting confidence of the Congress being re-elected, Gandhi hinted that he, along with state Chief Minister Siddaramaiah would turn Karnataka into a model state.

“Siddaramaiah and I will take the state forward after winning the upcoming election,” he said.

Gandhi was on a three-day visit to the state since Saturday to seek the people’s blessings in the assembly poll, due in April-May, through the Jan Aashirwada Yatra, organised by the party’s state unit.

He also visited Hindu temple Saundatti, Renuka Yellamma temple in the district, about 500 km from Bengaluru.