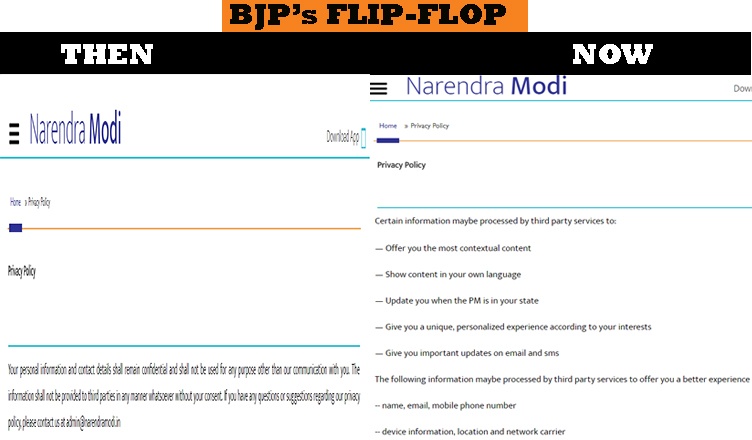 The privacy setting of the Bharatiya Janata Party (BJP) and Prime Minister Narendra Modi-promoted android app was “quietly” changed on Sunday. The development comes a day after French cyber security hacker Elliot Alderson exposed that the NaMo app was transferring personal details of its users to an American company. While earlier, the PM’s website claimed that any personal information would not be provided to third parties without consent, it now states that the information might be processed by a third party to offer users a better experience.

The following information may be processed by third party services to offer you a better experience:

The French hacker also noticed the change and tweeted about the same yesterday.

After the NaMo #android app exposé yesterday, the privacy policy of @narendramodi has been change quietly. The cached version is accessible here https://t.co/K7Uz5mUsR1

It was this French hacker only, who on Saturday exposed that as soon as a person creates profile on the Narendra Modi android app, his device’s information (OS, network type, Carrier etc.) as well his personal information (email, photo, gender, name) are sent without users’ consent to a third-party domain called http://in.wzrkt.com.

When you create a profile in the official @narendramodi #Android app, all your device info (OS, network type, Carrier …) and personal data (email, photo, gender, name, …) are send without your consent to a third-party domain called https://t.co/N3zA3QeNZO. pic.twitter.com/Vey3OP6hcf

What is weird is that the change in the NaMo app was done “quietly”, unlike other websites and apps, which announced the changes made in its system to make users aware of it.

The can of worms has opened and the BJP is having a hard time in justifying its illegal acts. What BJP has done is not only unacceptable but is also a threat to national security, as it lays out in the open personal information of users, which can be used by concerned third parties for their own gain.