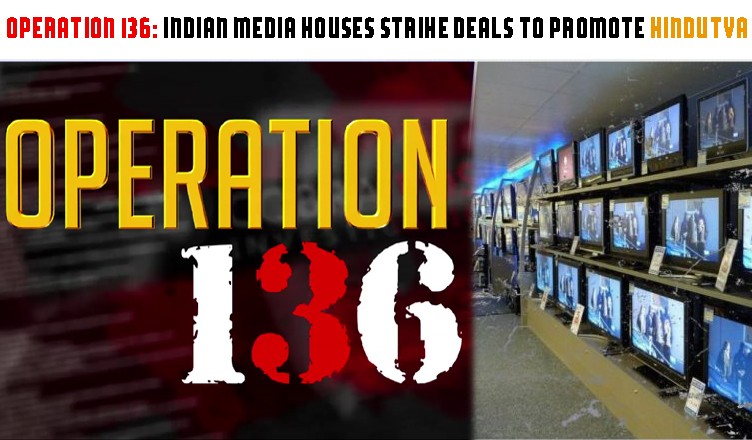 In a sting operation conducted by investigative portal cobrapost.com, a stunning revelation has been brought to light. The sting has proven that the media houses can be very used to influence India’s electoral process through false means. Here, an undercover reporter posed himself as a representative of an organisation promoting Hindutva for electoral purposes in front of various media houses representatives and who, not only entertained him but also agreed to promote their Hindutva agenda.

With Cobrapost.com’s ‘Operation 136’ it has proven that this country’s media organisations can “influence India’s electoral process through undesirable means”.  “The proposition was diabolical: If I reward you handsomely, would you peddle Hindutva in the garb of spiritualism to polarize the electorate and allow the party in power to harvest electoral dividends in coming elections? Ideally, the proposition should have been rejected at the outset,” the press release by cobra.com read. But, the major media houses not only accepted the offer but also came up with myriad ways to promote the Hindutva agenda of their big-ticket client.

Operation 136 has been derived from India’s rank it got in the World Press Freedom Index of 2017. During the sting, which extended for several months, the reporter interacted with representatives of all media houses, be it print, electronic or digital, such as India TV, Dainik Jagran, Hindi Khabar, SAB Group, DNA, Amar Ujala, UNI, 9X Tashan, Samachar Plus, HNN 24*7, Punjab Kesari, Swatantra Bharat, SccopWhoop and Rediff.com, India Watch, Aaj and Sadhna Prime News.

Undercover journalist Pushp Sharma posed himself as Acharya Atal and said he is associated with ‘Srimad Bhagvat Gita Prachar Samiti’. Many of the media representatives assumed Sharma (Atal) to be from, or close to, Rashtriya Swayamsevak Sangh, as he would often refer to his organisation as the ‘sangathan’. So, Acharya Atal carried a three-step plan to promote Hindutva in the run-up to the 2019 Lok Sabha elections, starting with ‘Soft Hindutva’ in the garb of spiritualism and religious discourse for the first three months, followed by content aiming at “character assassination” of political leaders like Rahul Gandhi, and finally pushing content to polarize the electorate along communal lines.

Some of the media functionaries accepted that they were associated with the RSS and were pro-Hindutva, and thus, would be happy to work on this campaign of promoting Hindutva. By this, they have shown that today’s journalists have forgotten the cardinal principle of journalism, that is, neutrality.