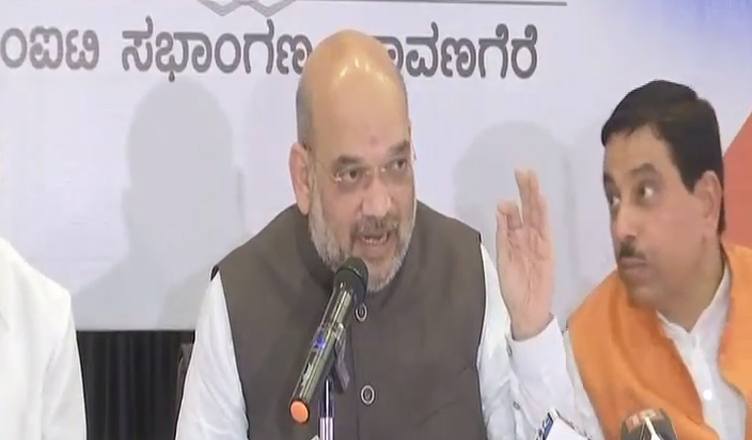 Looks like Bharatiya Janata Party (BJP) president Amit Shah and party MP Pralhad Joshi are campaigning for their rival party, Congress for the upcoming Karnataka assembly elections. Their recent ‘slip-of-tongue’ has given Congress a great time and to Twitterati, a laughable moment. While interacting with the media during a tour of Lingayat and Dalit mutts in Central Karnataka, he said ‘Yeddyurappa government’ instead of ‘Siddaramaiah government’. He said, “Recently, a retired Supreme Court judge said if ever there was a competition for the most corrupt government, then the Yeddyurappa government will get number one.”

However, Pralhad Joshi sitting beside him whispered into Shah’s ear, “Siddaramaiah government’, realising which Shah corrected himself in seconds and said, “Arre re…Siddaramaiah government is number one in corruption.” If this was not enough, the next in line was Pralhad Joshi, who wrongly translated Shah’s speech from Hindi into Kannada. He said, “PM Modi did not do anything for the SC/STs,” instead of saying CM Siddaramaiah.

Congress President Rahul Gandhi was quick to react and taking to Twitter he said that what Amit Shah said was true. “Now that the BJP IT cell has announced Karnataka elections, time for a sneak preview of our top secret campaign video! Gifted to us by the BJP President, our campaign in Karnataka is off to a fabulous start. He says Yeddyurappa ran the most corrupt Govt ever… True,” Rahul Gandhi tweeted.

The election date for Karnataka was announced yesterday. The election will be held on May 12, whereas the counting will take place on May 15.