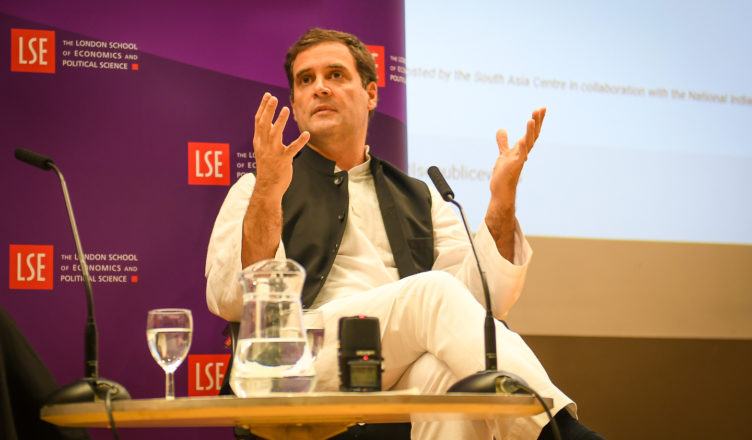 Rahul Gandhi, president of the Indian National Congress, has been interacting with various people in Germany and London. Yesterday he held an interaction with students and academics at London School of Economics. Mr. Gandhi responded to questions from dynastic politics, corruption, secularism, what Congress stands for and what is his vision of India. From addressing the issues of farmers, minorities, changing nature of institutions, etc. he spoke on many issues that concern the political scenario of India today. Some of the key points of discussion are highlighted below:

1. Parliament: Rahul Gandhi says that the kind of debates that take place in the parliament now is something no one can be proud of. There are experienced politicians in the parliament but the level of discussion now is very different from that of the 50s and 60s. The reason for the same is the MPs are not empowered enough and laws are being made in the PMO and not in the parliament.
2. Dynastic Politics: The topic is much in debate ever since he was elected the President of the party. Mr. Gandhi realised that while belonging to a certain family may help in entering the political sphere, the fact that he has been democratically elected thrice in the Lok Sabha.
3. Farmers: The farmer and agrarian situation has simply worsened in India under the Modi government. Addressing the issue, he said that his vision for the farmers is to meet with them and understand what they need and how the government can provide the same. It is not to tell the farmers what he wants them to do. Attacking the BJP government, he adds that the current vision of the government towards agriculture is to import agro-products which cannot be produced in India while no focus is being given on promotion of production in India.
4. 2019 Lok Sabha Elections: Mr. Gandhi’s stand on the elections was very clear. One, it is an ideological battle. Second, the entire opposition stands on one side while the BJP is on the other. The main aim is to reclaim the sanctity of institutions which are constantly under attack by BJP-RSS which eventually has undermined the ethos of democracy in the country.
Rahul Gandhi has been quite candid in answering questions while not shying away from answering them. Watch the full interaction below.