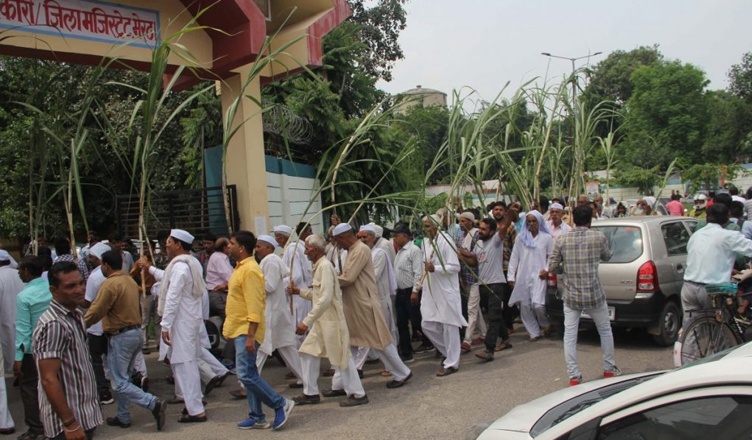 The Centre announced a relief package of ₹7,000 crore for sugarcane farmers in order to clear their dues in June. But the problem of pending sugarcane dues has not been resolved yet.

In Uttar Pradesh, sugar mills owed farmers ₹10,622 crore, as on August 20. Last year, this figure was ₹2,000 crore. Demanding that the government ensure that pending dues of farmers are paid, farmers from across western Uttar Pradesh have been protesting in Meerut since August 16.

Now, farmers have threatened to commit suicide if the government fails to address their demand of paying their dues. “We want dues of all farmers in western UP to be cleared by September 1. Otherwise, we will all commit suicide right here,” The Wire quoted Mehak Singh, president of the Ajgar Kisan Mazdoor Sangathan as saying.

Ajgar Kisan Mazdoor Sangathan is one of the organisations spearheading the protest.

Meerut’s Chaudhary Charan Singh Park has been made by the protesting farmers as their home, where they spend their day and night.

“Chullah aur charpayi leke aaye hain (We have come with our string-cots and our stoves),” The Wire quoted Singh as saying.

The farmers have already stressed on the point that their protest will not cease till their demand of clearing dues is met.

“This time we will not rest till our payment is cleared. We have been given many assurances in the past, but, nothing has happened. This time we want to see action. We want our dues to be paid,” Tyagi told The Wire.

“If the administration cannot ensure that, the steps that we take will be their responsibility. Some farmers are talking about ending their lives. And several farmers from various parts of the state are joining,” he further said.

The pace at which pending dues of UP sugarcane farmers is being cleared is dismal.