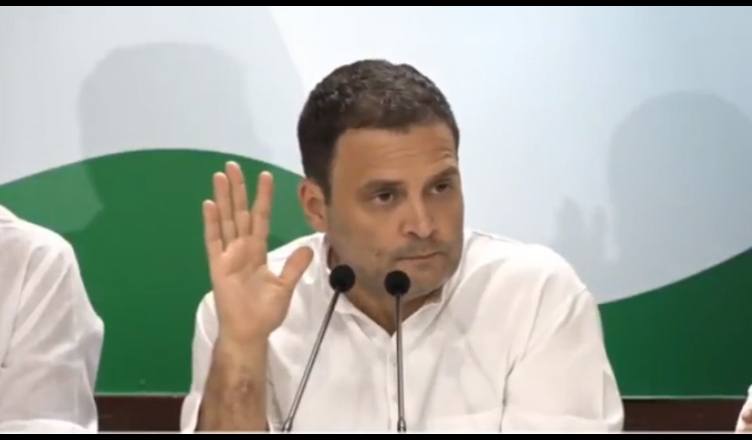 Congress President Rahul Gandhi on Thursday launched a scathing attack on Prime Minister Narendra Modi over Demonetisation and what they term as the ‘Great Rafale Robbery’.

The Congress Chief said that Demonetisation was not a mistake, but an intentional step taken by PM Modi to help his 15-20 capitalist friends.

“Demonetisation was not a mistake, it was a deliberate move. The PM had promised that black money, terror funding, and fake currency will be eradicated. However, the RBI annual report proves that all his objectives failed. I want to state the real reason of Demonetisation to everyone. PM Modi’s 10-15 capitalist friends were defaulters. He helped them to turn their black money into white,” Gandhi said.

“His aim was to help India’s biggest crony capitalists, those who financed him. Pockets of farmers, women, small traders, middle-sized businesses were looted and their money was given to 15 crony capitalists,” he added.

He then named a few people who benefitted from Demonetisation, like Bharatiya Janata Party (BJP) president Amit Shah and Ambani.

“We have seen in the case of Gujarat’s Cooperative Banks, of which Amit Shah is a director, where ₹700Cr worth of money was deposited,” he said.

The Gandhi scion then said that PM Modi must answer to the people of this country as to why this decision, that wrecked the economy, was taken.

“PM Narendra Modi must answer to the people of this country why this decision was taken which wrecked the economy, something no PM did in the last 70 years,” he said.

He reiterated that Demonetisation was nothing less than a scam.

He further said that during the United Progressive Alliance (UPA), NPAs were ₹2.5 lakh crore which have now jumped to ₹12.5 lakh crore.

Rahul Gandhi then raised the issue of Rafale deal. He said the party wants a Joint Parliamentary Committee (JPC) probe into the matter.

“There are clear facts in Rafale case. Anil Ambani has ₹45000Cr debt. He formed the company 10 days before the deal. What is the deal between Anil Ambani and PM Modi?” he said.

“India-France joint statement clearly states that the 36 aircrafts in question will be of the same configuration. The man [PM Modi] is lying,” he added.