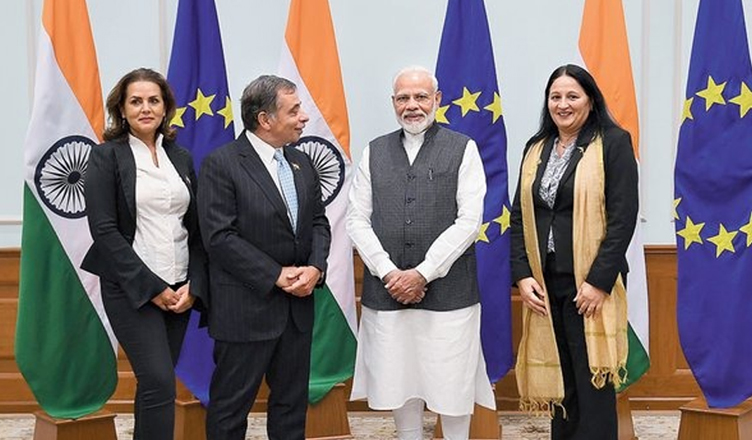 A Satire by Rakesh Kotti

Madam’s maiden project was at Madiwala—the hub of IT business in Bangalore. Madam, who describes herself as an International Broker, was venturing into brokering peace between domestic and international demagogues. So, she roped in from Europe some Malicious Eccentric Persons, (MEPs) to be taken on a picnic to the Madiwala Lake and tell the world that it was placid like the Paradise on Earth. The bots at the IT cell got ready for the next masterstroke of Saheb. As always, without ascertaining the truth, the bots were expected to flood cyberspace with eulogies to Sahib. It didn’t matter that some of the MEPs of the delegation had earlier made fun of our penury and struggles. So long as Sahib and his distinguished sidekick were kept happy, none would be questioned, by the Entrapment Directorate or the Centre Bored of Investigations. And so Madam from Madiwala instructed the bots:

“All praise to the deadly duo,

If need be, get very rowdy,

And speak in unspeakable innuendo,

But greet the world with a Howdy!”

The bots understood this was a different operation. All the while they were used to berating those in the Valley and accusing them of being stone-pelters. But since the last masterstroke, they have been busy convincing the world that the Valley was indeed peaceful. They argue that the eight million people struck by their master’s stroke have been looking for inner peace and have hence voluntarily gone off the grid. This sudden change of narrative comes with ease to bots as they either have no shame or are full of it. A bot is either shameful or shameless. That’s a prerequisite to be a part of the party that served lots of BJP—Bajji Jalebi and Pakodi. Pakodi was the hot favourite after Sahib once claimed that it fights unemployment. Munching on Pakodi, the bots hit the keyboards, claiming that peace has been restored and repeated the words of Sahib, who told the diaspora in multiple languages that all is well.

Also read: EU MPs are allowed to visit Jammu and Kashmir while Indian MPs are denied entry. WHY?

Meanwhile, Madam from Madiwala got the toadies in the media to orchestrate harmony and sing praises of Sahib. Sahib was mighty pleased with the melodies. He joined the band and took part in the orchestra personally. Sahib didn’t have to blow his own trumpet, as the toadies did it for him every day—sometimes overtly and sometimes hidden in the clouds, lest the radars pick up the strains of music or the strains on the economy. Before the MEPs could return from the orchestrated picnic in the Madiwala Lake, the bots began telling their world that Paraside has been restored and it will now help India become stronger. When asked about the Economy, an excited Baba Rasputin twisted his beard and body and exclaimed, ‘Cowabunga!”

But someone found out that Madam from Madiwala, the international broker, runs a think tank called WEST—Weird Economics Stink Tank. It was the advice of such tanks, which got the economy to tank. The international broker got us broke. The melody is now a malady. Something needs to be done before Sahib reddens his eyes, that too before the third anniversary of one of his masterstrokes. Should Sahib decide to strike again, like he did in 2016, the bots will have to dish out more Pakodi to ensure the GDP—Gobar in Domestic Places—doesn’t go down too much. If that happens, Madam from Madiwala will be assigned the task of orchestrating another picnic. She will have to take the Malicious Eccentric People on a Shikara boat ride on the dull lake. And she will have to pay the MEPs lots of quid. Meanwhile the valley remains off the grid.

One thought on “Madam from Madiwala”