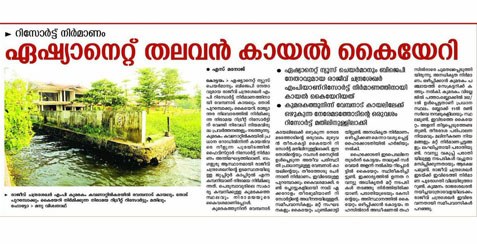 Rajeev Chandrasekhar, Chief of Asianet News and BJP Rajya Sabha MP, encroached Vembanad Lake in Kerala for the construction of a resort.

Many unlawful activities have been taking place in order to enable the construction of an international standard resort named Niranmaya Retreat Resort – a 5 star rating resort owned by Jupiter Capital group and headed by Rajeev Chandrasekhar. The resort is in the last stage of its construction.

In order to construct the resort, a large area of the lake, canal and government land was encroached.

The Jupiter Capital group also encroached the whole area of “Neramadathodu” which flows from Kumarakom to Vembanadu Lake. The whole construction was going on in an ecologically sensitive zone, as listed by the Ministry of Environment and Forests.

The resort also acquired four acres of government land which has now led to a protest by the local people. They have also filed a complaint in the Kerala High Court.

As per the instructions of the Kerala High Court, the taluk survey officer visited the construction site and confirmed the land grab by Jupiter Capital. However, the higher revenue officials stopped further action.

The Kottayam tehsildar instructed the additional tehsildar to clear the encroachments and a letter was given to the secretary of Kumarakom Panchayat. The encroached land was in the 10th and 11th sector of the Kumarakom Village.

Some other serious complaints against Jupiter Capital group include violation of Kerala Paddy and Wetland Conservation Act, 2008, Environment Protection Act, 1986, Paddy Land and Wetland Act, 2008, and Prevention and Control of Pollution Act.