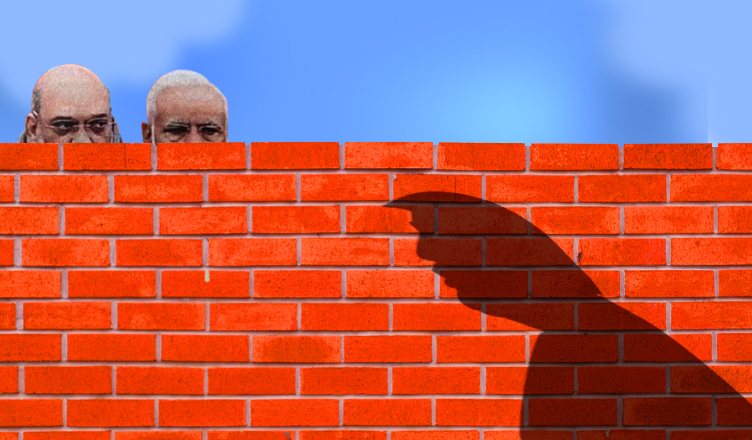 The couple hid behind the wall. Vikas and Pragati, both former Gujarat models took shelter behind a large wall as the Bajrangi Voodoo Dolls run amok on Valentine’s day, as they do every year displaying their sanskari behavior. The crazy Bajrangi Dolls—often, but not always draped in saffron robes—barged into restaurants, parlours, and even legislatures. They’re robbers in robes. One recently got into a fight on a flight and thankfully didn’t fly the flight herself and crash into any legislature. Another robber in robes, is a notorious cowboy from Udder Pradesh. The mad monk often confuses Pragya with Pragati. And they’ve been robbing Vikas and Pragati, harming them immensely since they barged into the legislatures.

No one knows what their grouse with love and peace is, but even a modicum of love or modicum of intelligence or modicum of anything remotely decent makes the Banjrangi Dolls go bonkers. They’re hypersensitive about anything that involves a modicum. The only Modi they worship is Lord Lapakdas. In his childhood, Bal Narendra was known for his false bravado that included fighting crocodiles and shedding crocodile tears. Bal Narendra grew to become the falsely revered, divine demagogue, Lord Lapakdas after a stint as a Chowkidar and a cameo as Could specialist Radar Rambo. Lord Lapakdas is complemented by his distinguished sidekick and Man Friday, Mir Jumla Shah and together they are unpopularly known as the deadly duo subservient only to Jio.

Lord Lapakdas however had a problem that even his Man Friday couldn’t solve. His buddy and Man child, the disco dancer from the United States of Armoury, DJ Trump, aka Agent Orange announced his visit. The deadly duo was keen to present to him, Vikas and Pragati. But since the whereabouts of Vikas and Pragati are unknown, the diabolical duo decided to distract Agent Orange. They built a wall to hide the penury and squalor so that Agent Orange wouldn’t be reminded about Vikas and Pragati—the two missing Gujarat models, who went from walking the ramps to absconding tramps.

The duo decided on how to distract the nation too. While Lord Lapakdas would utter his Mann ki Baath and blabber about Vikas, Jumla Shah would indulge in some Ton ki Baath and talk Bakwas. And so, the duo prepared for their Mann ki baath and Ton ki baath, peppered with Vikas and Bakwas. But Jumla Shah being the Jumla that he is, he rattled on about some incomprehensible ‘Tree Melon Tons becoming Fire Melon Tons’. This incorrigible arsonist has some fire in his belly!

Jumla Shah devised a diabolical plan. The deadly duo would be stealthy like the crouching tiger and hidden dragon and pounce on Vikas and Pragati at the first sight. However, Vikas and Pragati were elusive—or they had become so anorexic that no one could recognize them. Bearing the stench of the gutter gas, the diabolic duo now looked like the scowling tiger and the bitter dragon. With Vikas and Pragati nowhere in sight, they wondered how they’d face the next season of the Indian Political League. The next best distraction would be to feed the Bajrangi Dolls lots of Pakoda, lest they indulge in arson. After all, the deadly duo owned the BJP shop—the Bajji Jalebi and Pakoda shop. But Lord Lapakdas had invested people’s money in the stalk market to stalk his adversaries, while Jumla Shah attempted the fire melon ton trick and burnt the economy down. Now there was no ghee to fry the Bajji, Jalebis and Pakodas nor was it enough to grease a few palms in the Indian Political League. And just when Jumla Shah was going to start stalking Vikas and Pragati again, the mad monk barged in with an idea to replace the ghee with which palms were to be greased in the Indian Political League, Bengal season. The mad monk said, “If we can’t grease palms with ghee—what about Dalda?”

“That’s an udderly delicious idea!” thought Jumla Shah, even as he instructed his Bajrangi Dolls to ask, ‘What about Dalda, what about Dalda”, every time anyone spoke during the Bengal elections.

One thought on “How Vikas and Pragati were saved by Dalda”