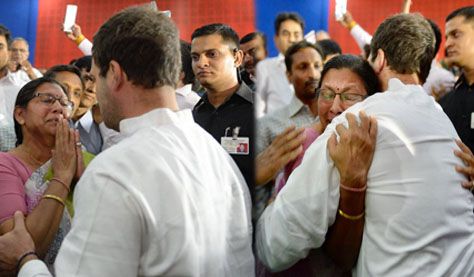 When Congress vice-president Rahul Gandhi visited poll-bound Gujarat’s Nikol to speak teachers at Gyaan Adhikaar Sabha there, an ad hoc professor could not refrain herself from breaking down in front of him and narrating the pitiful plight of the educators in Modi’s ‘Gujarat Model of Development.’

Ranjana Avasthi, as she claims, has never been paid full salary or got maternity leave in the 22 years of her service. All she desires now is to retire with respect and get pension so that she is able to live a dignified life after retirement. The same was expressed by her to Rahul Gandhi and with tears in eyes and hope in heart.

Rahul Gandhi, a humble and loving human being that he is, could not stop himself from getting down the stage and embracing the woman just like his elder sister.

While narrating her ordeal, Avasthi said that last week, the government got part-time professors who hold PhD degrees to fill up forms so they could put them in the fixed pay category.

There are 122 such people including Avasthi who will be employed by the government for a salary of Rs 12,000 for five years.

While Avasthi only dreams of retiring with a pension in order to live a  dignified life, but she thinks that the government is taking that away from her.

In 1994, Avasthi was appointed as a part-time professor of Sanskrit in M B Patel Rashtrabhasha College, as there was no vacancy there at the time. However, she says was hired following the process one initiates to hire a fulltimer.

She remained a part-timer for 10 years. Back in 2006, she saw government advertisements in the newspaper saying that part-timers would be made full time professors.

Though there were around 250-300 such professors, but such a thing never happened.

“And then last week, they dropped the fixed pay bomb on us. Till now, I had hope that I would be made eligible for pension. Now that they have made me a fixed pay employee, this hope is shattered,” she further said.

Avasthi has not only undergone financial torture, but mental and physical as well. The woman must have had such a hard life that she could not control her emotions, but bore her heart out in front of Rahul Gandhi.

Avasthi is only out of those many whose plight is the same under the Gujarat model.