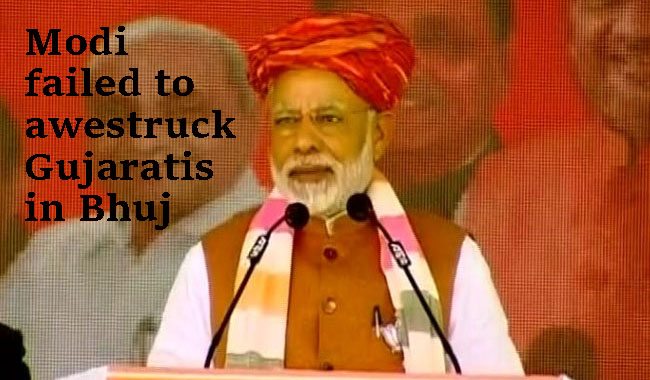 This time, Prime Minister Narendra Modi has failed to spread his charm through the magic of words and his oratory skills. Gujaratis could not be wooed by him as they also understand Modi’s strategy now.

He failed to awestruck Gujaratis in Bhuj also, as the voters are already aware of the ground situation and the reality of their state under the BJP regime.

Let’s have a look at the hollow claims made by him and in return, we also provide a counter to his false statements:

April 2016: Scorching heat and depleting water storage is pushing Gujarat towards one of the worst water crisis in the recent history. The situation is alarming in the regions of Saurashtra and Kutch, where the total live storage is merely 8 per cent and 15 per cent of the capacity thereby making the wait for South-West Monsoon unbearable for the people of these water-starved districts.

Situation in Kutch is no better with close to 15 per cent live storage. “We get water once in 3-4 days from Narmada Canal, but that is available to only a part of the district. The rest are left to the mercy of the Nature,” said the APMC chairman.

In 2013: Despite Chief Minister Narendra Modi’s claim that the Narmada Project waters have reached every nook and corner of the State, as many as 17 districts of Gujarat’s perennially drought-prone regions of Saurashtra, Kutch and north Gujarat are in the throes of severe water crisis.

Several cities and urban areas of Saurashtra and Kutch regions are already facing acute water shortage. They get alternate days supply to only about two to three days supply in a week. This scenario persisted even when the ambitious Sardar Sarovar Narmada Project was still being conceived.

The much-touted ‘Gujarat Model’ is being dissected and examined. The best thing that happened to Gujarat was the formation of the state in 1960. In the 57 years since, Gujarat has been ruled by the Congress (and by some offshoots) in the first three decades and by the BJP since 1995. Even before 1995, Gujarat’s growth rate was higher than the national average and Gujarat has maintained that edge. Amul, various ports, the vibrant textile industry and the chemical and petrochemical industry pre-date 1995. A large share of the credit is due to the people of Gujarat. (Basically, Gujaratis are a mercantile community. They focus on trade and business)

Contribution of Congress Party in Development of Gujarat

Gujarat state was established in the year 1960. Since Mumbai, the financial Capital of India became part of Maharashtra, Gujarat was left behind in terms of Investments and Development in initial years of independence. But due to effective policies of Congress Party, Gujarat reached first/second in Industrial Investments in year 1985.

Today’s Development of Gujarat is due to strong foundation led by Congress Governments. People are enjoying the results of development due to effective policies implemented by congress party and also due to foresight of Congress for future development.

Development of Saputara as Tourist Place

Base of Sardar Sarovar and Environmental Permission

Development of Haddapa and Lothal

Development of Gandhinagar as Green City

Development of Fisheries Industries in Veraval and other Ports

Development of small ports near Coastal area of Saurashtra.

Development of Bandhni and Embroidery Industries

On Kutch Earthquake of 1956 and Pandit Nehru

Anjar, which is a historic town and very congested in the old parts was largely destroyed in this earthquake of 1956. Later, under Congress Government, new houses were raised on old foundations, and in due course of time also the new township of Naya Anjar or New Anjar township was founded after this earthquake for rehabilitation purpose. Post-independence, for almost 10 years, Kutch remained a part ‘C’ state under the Centre’s direct rule and administered by its appointee, the chief commissioner.

Kandla was constructed in the 1950s under Pandit Nehru as the chief seaport serving western India, after the partition of India from Pakistan left the port of Karachi in Pakistan. 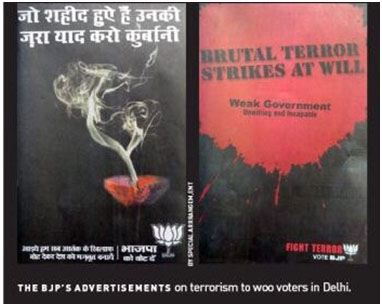 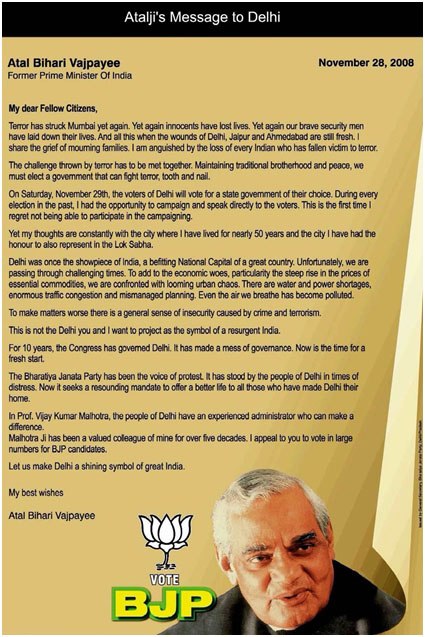 When the standoff with China was on: – Why did Cabinet Ministers went to China ?

The Opposition has unequivocally supported Indian Armed Forces and the Government in surgical strikes against terrorists in Pakistan as also in taking all steps for demolishing the terror infrastructure against India. We reaffirm the same.

It has full faith in the brave hearts of Indian Armed Forces in conducting a surgical strike as we recognize that this is neither the first nor will be the last surgical strike conducted by our Armed Forces to defend the country and our people. It is a matter of pride that even in the past our forces have successfully conducted such surgical strikes on numerous occasions, particularly on 01.09.2011, 28.07.2013 and 14.01.2014, giving a befitting reply to the enemy. In its maturity, wisdom and in the interest of National security, the previous government avoided making loud claim for the effective response and action of Indian Army, which had the full support of political leadership.

There has never been a reason to raise a question or doubt on the statements by DGMO on surgical strike. Government, however, needs to call the Pakistani bluff and false propaganda by using all information, evidence and instruments at the disposal of Indian state. In a serious and challenging situation where Pakistan continues to export terror like in Baramulla yesterday and commit ceasefire violations, we will like to ask Narendra Modi if the immature and casual statements being made by former Defence Minister Manohar Parriker and other Union Ministers have his sanction and support.

We also urge upon the Government to stop politicizing the sacrifices and bravery of Indian soldiers for myopic political gain.

So, Modi should fight the elections on true and genuine planks and not on something which only divides the nation and creates hatred.