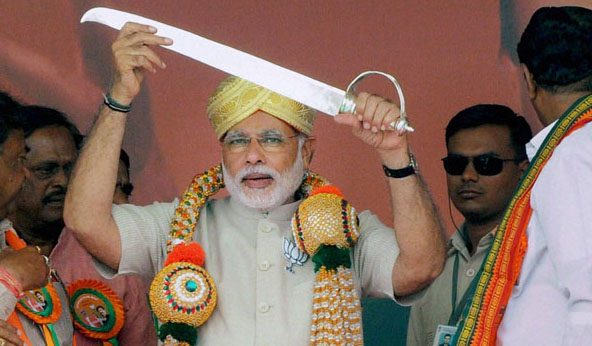 In my two previous posts on Modi, I have tried to show how Modi’s claim to Gujarat’s economic prosperity is untrue. Gujarat was always prosperous. Gujarat never had electricity shortages. Gujarat always had an industrial climate – industrialists always loved Gujarat. The roads were always good. Yes, the drinking water is Ahmedabad is now much better thanks to the Sardar Sarovar Project, but that project was started much before Modi or the BJP came to power in Gujarat. I have also written about why Modi was desperate to woo the Muslims – in no state in India where the Muslim population has exceeded the national average of 13% (and that includes four of the biggest five states – UP, Bihar, WB and Andhra Pradesh) has the BJP ever done well. This last piece is a focus on Modi personally. Not on the BJP. Not on other leaders of the BJP. Nor it it any wave of support for the Congress or other non-BJP parties. This is an apolitical piece. This piece is solely and squarely on Modi himself. The more one looks at Modi’s conduct, it becomes apparent that there is an inner core of his which is comparable with Hitler’s.

You cannot hide the true dictatorial character of a person behind a pretentious veil of democracy for too long. On the one hand, there is the sham of a democratic “sadbhavna” fast on in Ahmedabad. On the other hand, there is a shameful dictatorial attempt on to scuttle the protesting crowds. Protests against Modi in Gujarat?

But why should we be surprised by Modi’s suppression of the protest held by riot affected victims against his fast? Knowing Modi’s style and his attitude to those who don’t swing to his tune, it should have been expected. After all, the sadbhavna fast was Modi’s grand plans to pitchfork him into the arena of central politics. How could some so-called victims disturb those plans?

A few months back it was no different when the Congress attempted to scuttle the voice of dissent by first not giving Anna Hazare permission to fast at Jantar Mantar. That was panned by one and all. Then the party made the mistake of arresting him and putting him in Tihar. That immediately backfired. But at least the public howls woke the party up. It quickly changed tracks. The party was forced to agree to an alternate and bigger location for the fast; to an unconditional fast-unto-death no matter how undemocratic that is. At least, the Congress responded with contrite behavior. What about Modi? Will Modi respond by apologizing for the detention of the protestors? We will wait to see if he does that.

In many ways, Modi’s motives, ambitions and methods are similar to those of Hitler. Modi’s motives have always been to cater to the fringe right-wing elements of his Hindu followers (the majority), just like Hitler catered to the vast majority of right-wing Germans. He has unabashedly been anti-Muslim, just like Hitler was unabashedly anti-Jew. And it’s worked for Modi just like it worked for Hitler. The Germans handed Hitler one of the biggest electoral victories of the time with 44% of them voting in his favor. The Gujaratis have likewise rewarded Modi by giving him three successive terms in the state. Modi’s ambitions have always led him beyond the shores of Gujarat towards Delhi. Just like Hitler’s led him beyond the shores of Germany to continental Europe. Modi talks of the “asmita” of Gujaratis; Hitler spoke of the Aryan pride of Germans.

Even the early beginnings of Hitler’s anti-semitism could be traced back to a pre-existing feeling of German majority suspicion against the Jews. A theory that existed after WW1 was that the German defeat in that war was not caused on the battlefield but by the liberal, socialist and communist subversive elements on the home front (the Jews). It’s a very similar situation that exists in India. There is a feeling in many in India that it is the Muslims who are behind the terrorism in India. Additionally, in Gujarat, for many decades now, there has been a feeling that the Muslims are anti-India and pro-Pakistan. That they cheer for Pakistan when an India-Pakistan cricket match is played. This may be all rubbish but this feeling has persisted for long in Gujarat.

There was another reason why Hitler became anti-semitic. Hitler was influenced by the thinking of Marx in his early life. However, he despised the “class division” propounded by the Marxists. After WW1, when the German society was vastly divided, Hitler blamed the Marxists for the divisions in society. And to his chagrin, most of the proponents of Marxist ideology were the Jews. In Hitler’s mind, that was proof that the German problems were because of the Jews. It’s a very similar thing with Modi. In many ways, Modi hold the politics of appeasement followed by the other political parties responsible for many of the problems in India. If the Muslims were not appeased, they would have “fallen in line”. If the Muslims were not appeased, they would have been more nationalistic. Modi’s strategy is a political strategy. A strategy to win the support of the majority community by using the appeasement of Muslims as bait. Just the same was as Hitler’s political strategy was to win the support of the majority Germans by using the minority Jews as bait.

Hitler’s supporters often cited his huge popularity at home to prove his leadership and charisma. His right to rule Europe. Hitler was an extremely powerful orator who could rouse the crowds. It’s the same with Modi. Even the biggest detractors of Modi cannot deny that Modi’s charisma is more than that of most other leaders and so is Modi’s oratory. By making Jews the butt of all things wrong in Germany, Hitler used his oratory to the hilt in polarizing the Germans against the Jews. Modi’s doing the same. He is making the Muslims the butt of all things wrong in India to generate the support for himself in Gujarat.

Hitler had many allies in his war against the Jews. The Axis powers – the alliance of like-minded nations – included Italy, Japan, Hungary, Romania and Bulgaria. There was indirect support from Finland, Iraq and Thailand – countries who were fighting their own local problems and found that their enemies were the same as the enemies of Hitler. Many people who commented on my previous two posts on Modi said that Modi was “growing the NDA alliance” and making it stronger than it was. That’s exactly how Hitler’s thinking was when he signed the agreements that joined the Axis Powers. The NDA includes partners like the VHP, the Bajrang Dal (non-political but still large organizations) and the Shiv Sena who agree with Modi’s ideology. And it also includes many other parties who are merely fighting their local battles against the other non-BJP political parties.

And here’s something that everyone knows but no one really ever admits. Hitler’s cherished goal was to set up the “New Order” – German hegemony in continental Europe. In many ways, Modi’s goal is also the creation of a new order. A rule of Hinduism all over India. If he had his way, Modi would have India be called a Hindu country rather than a secular one.

The parallels between Modi and Hitler are nothing unique to this post. But sometimes, it just helps to re-look at historical facts to see if there are lessons to be learnt. Germany was always a great country like Gujarat has always been a great state. Germany was one of the leaders of the Industrial revolution just like Gujarat has been one of the leaders of the industrial revolution in our country. Germany led in engineering. Gujarat leads in exports; in chemicals and pharmaceuticals and many other domains. Hitler thought that domestic support could leapfrog him to pan-Europe leadership. That’s the mistake he made. That put the entire German population – along with a few allies – against the rest of Europe. Modi should keep that in mind. His home support is good for him to remain in Gujarat. But that support cannot leapfrog him to the center. For that, he has to have a new gameplan; a new strategy. A new strategy that recognizes the lay of the land outside Gujarat…..and to get there, he has to first shed his dictatorial ways. He has to become much more inclusive and democratic. He must allow protests against his government. He must be man enough to face them.

The real truth is that by stopping protests against his movement, Modi has once again shown his Hitleresque features. This is his moment in the sun. How can someone put up a protest against him at this moment? The protest has to be scuttled. This is a very Hitler-like response. Hitler scuttled all opposition to his rule. But he failed. Modi shouldn’t make the same mistake.