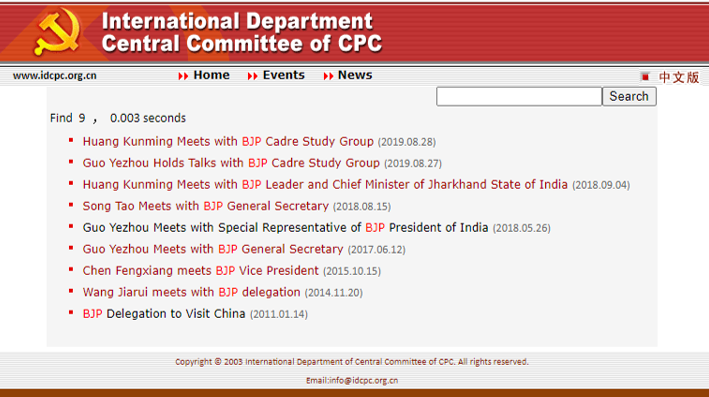 Most Indians are perplexed by the BJPs response to China’s aggression. Not only is the BJP government not being frank, it is retaliating by attacking the opposition and insinuating that there is a link between the Congress party and the Communist Party of China, (CPC). The truth however is that the BJP is projecting its guilt onto the others.

Prime Minister Modi visited China the maximum number of times in our history—5 times as the PM and 4 times when he was the Chief Minister. In all, Modi and Jinping met a total of 18 times since 2014. In September 2014, the Chinese premier visited India supposedly to enhance bilateral relations. However, what it is best remembered for is the visuals of Modi and Jinping gently swinging on the traditional Indian Jhula. The imagery of bonhomie between the two was misplaced as there was tension at the border.

In fact, soon after coming to power the Communist Party of China reached out to the BJP to build closer party ties. The BJP sent one of the largest delegations to the cooperate with the CPC. Over the years the two parties cooperated built close ties, with the state-controlled China Radio International even suggesting that the BJP and CPC must initiate a global political parties’ alliance.

In addition to this, it must be remembered that in 2011, Modi was invited as a guest for the CPC meeting in China. Many people noted that he was given unprecedented importance, ‘going beyond established norms.’ Pleased by this, Modi had even introduced Mandarin language in Gujarat school curriculum. Upon Modi intervention, China had even released 22 diamond smugglers from Surat.

Even in June 2019, the BJP was trying to enhance its relationship with the CPC. Between August 26th and 1st of September 2019, an 11-member team of the BJP had visited China at the invitation of the CPC.

Meanwhile, Narendra Modi continued to engage with his follower’s Chinese followers on Sina Weibo, which is the Chinese equivalent of Twitter, which is banned in China. He often uses the platform to wish the Chinese leadership on their birthdays. In 2016, as he wished Jinping, China opposed India’s entry into the Nuclear Suppliers’ Group. In 2017, as the PM wished Jinping, the Doklam crisis was brewing. Despite the crisis, Modi pretended that all is well between the two countries. And last year, as Modi continued his streak of birthday wishes to the Chinese leaders, China had brought the Kashmir issue to the UN security council and openly supported Pakistan in the matter.

In a bid to project himself as a global leader—or Vishwa Guru as some of his followers call him—Narendra Modi and the BJP, which is a close ally of the CPC ignored the ‘birthday bumps’ China reciprocated with. The internet is rife with several pictures of Modi’s subservient body language in the presence of the Chinese leadership. Sadly, it is not about an individual or a party, but about India’s self-respect which is being compromised by the BJP government. No matter how much the BJP attempts to project its guilt onto the opposition, particularly the Congress party, the reality is clear and indelible.

The BJP must answer why it let down India’s interests and apologize to the nation for indulging in political drivel even as India faces one of the biggest crises in recent times—a crisis which is largely the result of the BJP’s incompetence, arrogance and cowardice.