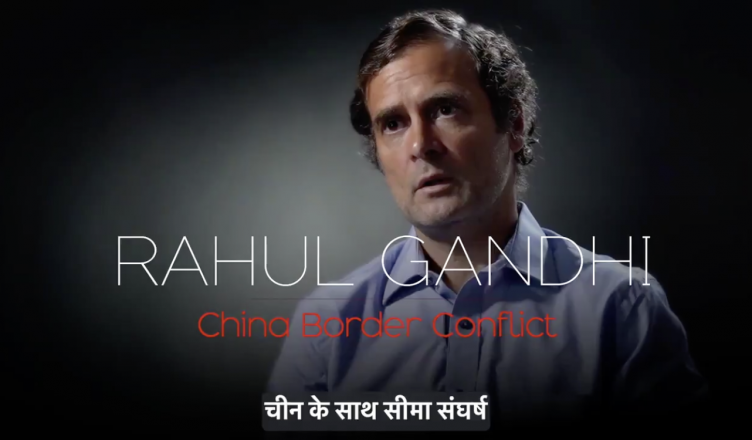 In the post-truth world where mainstream politicians across the world have resorted to empty rhetoric, falsehoods and canards against political opponents, Rahul Gandhi endeavours to enhance the quality of political discourse. He has long been drawing attention to the pressing problems that India faces. Yet, the media has largely avoided discussing the problems and presenting the truth objectively. Some sections of the media have actively spread falsehoods in a bid to shield the government from questions.

In such a hostile political climate, Rahul Gandhi has launched a new video series on Social Media where he discusses various crises that India faces. In the first episode, he delves into how India’s interests have been compromised by the BJP government, which emboldened the Chinese to attack us. He explains how our strategic relationship with the USA and the close relationship with Europe has largely become transactional while our close friendship with Russia is now disturbed. He draws attention to the reality that in our immediate neighbourhood, our traditional allies are now openly hostile at the behest of China. Sri Lanka, Maldives and even Nepal with whom we share close sociocultural ties is ‘furious’ with India.

He poses an important question and explains why China has chosen this particular time to become belligerent with India. He puts the current events into perspective and explains that the security of a nation is profoundly influenced by a confluence of various forces. Elucidating on the various factors that scaffold national security such as the health of the economy, the quality of foreign relations, and the harmony amongst its people, Rahul Gandhi drew attention to how the BJP government has failed on almost all aspects of governance, thereby making India vulnerable. It is at this weak moment that china dares to attack India as it knows well that a weakened India will not be able to retaliate adequately.

Discussing the state of the economy he rues that India used to once pride herself on the robust economy. However, today the economy is ruined by the policies of the BJP government over the past six years. Our strengths have suddenly become our weaknesses and the government continues to live in denial, refusing to learn and make a course correction. India is faced with the highest unemployment in over 40 years and the economy was in tatters even before the outbreak of the pandemic.

Thousands of people have shared the video on social media and welcomed the effort to ensure a healthy debate in society. When leaders dissect the crises we face, and lucidly explain how they can be overcome, citizens gain an insight into governance and become conscious about the role they plan in strengthening democracy in India. After all, the strength of a nation is deeply dependent on the degree of enlightenment of her citizens. Rahul Gandhi has certainly taken the right step in encouraging enlightened political debate in a political culture otherwise rife with abuses, trolling and drivel.