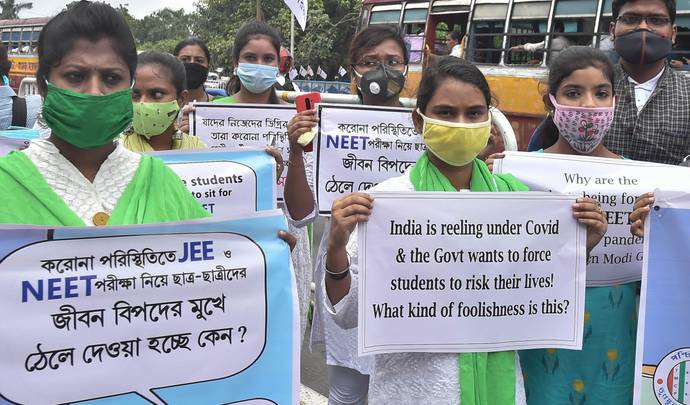 At a time when experts are warning of COVID19 upsurge in following months, how wise is it for the government(s)- Central as well as State- to conduct university exams? At this juncture, expecting students to appear for the exams is juxtapose to asking a fellow companion to enter a lion’s den unarmed.

Exams are a gateway for millions of students in this country for a better tomorrow. Students toil for years, burn the midnight oil, to pass a 3 hour duration entrance tests that shall determine their future course of action. Hence, government bodies must establish a level playing field for all candidates.

For the upcoming JEE/NEET exams, many students belong to rural areas with little or no financial assistance. These students are at a disadvantage for primarily three reasons in comparison to other students residing in urban areas with substantial finances to back them.

The aforementioned are the 3 basic difficulties faced by innumerable students.

The HRD ministry has taken the responsibility of student safety within the premises of the exam centres only. In matters regarding accommodation, travel and food, students are left to their own fate as per their means. If a student is infected before or after the exam, the government has categorically absolved itself of all responsibilities. The ill-thought initiative has only exacerbated the anxiety amongst students.

The government had enough time and resources at their disposal to ensure smooth conduction of exams. Rather than create a portal to take input from students pan India and address their grievances accordingly, the government resorted to its usual tactic of what it is best at, i.e, BLAME & EVADE. The Central government is blaming the opposition parties of spreading rumours and misleading the students in an attempt to sabotage their academic year.

As past events have taught us, incompetency and short-sightedness is the hallmark of this government. The concerned authorities had the data of all registered students along with their addresses. How difficult is it for them to build enough exam centres, in every state, so that the students are tasked with one responsibility only – to prepare for the exams?

Exams were never meant to be a political issue (and still aren’t) to a majority of students, but the insensitivity displayed by the HRD ministry helped the opposition earn brownie points. Prior to announcing the examination dates, had the HRD ministry issued guidelines to dispel the fears of students & parents alike, the situation could’ve been better handled and avoided unnecessary controversy.

In any humane society, the loss of even a single innocent life is shameful. Just as the government expressed no remorse at the deaths that occurred due to demonetization and GST, likewise it will pay no heed to any viable concerns regarding students.

As history has taught us: “To a dictator, human lives don’t matter and the least of all- Students”.